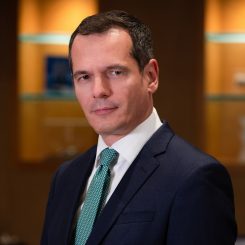 Previously, Mr. Manousakis was the CEO of OTE Rural North and South, having held various positions of responsibility in the Greek Telecommunications Company, where he played an instrumental role in the design of cutting-edge telecommunication services. He was appointed Secretary General of the Hellenic Ministry of Economy (2015), as well as a Director at Black Sea Trade and Development Bank for the same period.

Mr Manousakis holds a PhD in Electrical Engineering from the National Technical University of Athens. He has also academic experience having been a lecturer at the University of Piraeus. His career combines business development leadership and complex project management with country strategic planning.