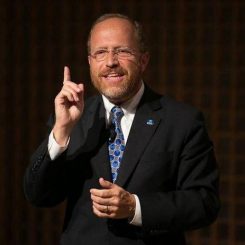 Randy Cohen is Vice President of Research at Americans for the Arts—the national advocacy organization for the arts—where he has been empowering arts advocates since 1991. Randy stands out as a noted expert in the field of arts funding, research, and using the arts to address community development issues.

He publishes Americans Speak Out About the Arts, the nation’s largest public opinion study about the arts, and produces the two premier economic studies of the arts—Arts & Economic Prosperity, the national economic impact study of nonprofit arts organizations and their audiences; and Creative Industries, a mapping study of the nation’s 675,000 arts businesses and their employees.

His 10 Reasons to Support the Arts blog received the Gold Award from the Association of Media & Publishing—their top honor for best blog post of the year. Randy led the development of The National Arts Index, the annual measure of the health and vitality of arts in the U.S. and the National Arts Policy Roundtable, an annual convening of leaders who focus on the advancement of American culture—launched in partnership with Robert Redford and the Sundance Institute.

In the late 1990’s, Randy collaborated with the President’s Committee on the Arts and the Humanities to create Coming Up Taller, the White House report on arts programs for youth-at-risk; and the U.S. Department of Justice to produce the YouthARTS Project, the first national study to statistically document the impact of arts programs on at-risk youth. A sought-after speaker, Randy has given speeches in all 50 states, and regularly appears in the news media—including the Wall Street Journal, The New York Times, and on C-SPAN, CNN, CNBC, and NPR.

Randy has been a policy specialist for the National Endowment for the Arts, founded the San Diego Theatre for Young Audiences, and worked in medical research for Stanford University and Scripps Clinic and Research Foundation. His board work includes the League of Historic American Theaters.

Randy is a past Chairman of the Takoma Park Arts & Humanities Commission, during which time the Commission completed a cultural plan, established the city’s Poet Laureate and public art programs, and led the development of a million-dollar conversion of the city council chambers into a performing arts space.