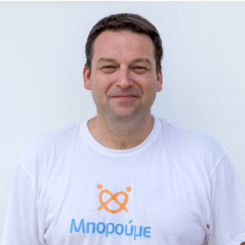 Co-Founder & CEO Boroume Alexander is one of the co-founders and the CEO of NGO Boroume (“We Can”), a leading food saving organization of Greece. Since 2012, Boroume has saved & offered more than 30 million portions of food from thousands of donors to over 600 charities all over Greece and is currently saving & offering more than 25.000 portions of food on a daily basis. The organization has been awarded with the European Citizenship Award 2017 by the European Parliament. He is a Marshall Memorial Fund Fellow, a board member of Ethelon, a member of the advisory board of Vouliwatch, a Junior Achievement Greece volunteer (virtual social enterprise mentor) and a jury member of the Social Impact Awards Greece. He holds degrees from the Ludwig-Maximilians-University of Munich (1996-2000, Magister Artium, Political Science, Economics, International Law) and the London School of Economics (2000-2001, MSc International Relations).