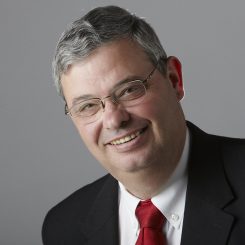 Mr. Alexandros Kachrimanis was born in Ioannina in 1956, where he finished Kaplaneio Primary School and Zosimaia High School of Ioannina. He is Mechanical- Electrical Engineer of Metsovio National Polytechnic University and he has been working professionally in Ioannina since 1982, where he maintains technical office.
He is married with Eleni Kassaros and they have three children. His action in self government is particularly wealthy, as soon as: ∙ He was elected for the first time as a municipal counsilor in Metsovo Municipality in 1983
∙ In 1986 he served as President of the Municipal Council in Metsovo Municipality for four years
∙ From 1990 to 2002 he served as a member of the Governing Committee of the local union of Municipalities and Communities at the Region of Ioannina and as Secretary from 1999 to 2002
∙ From 1991 to 2002 he served as Mayor of Metsovo Municipality ∙ In self government elections in 2002 he was elected as Prefect of Ioannina and he was reelected in 2006
∙ In self government elections in 2010 he was elected as the first Governor of the Region of Epirus
∙ In May 2014 he was re elected for five years
∙ In May 2019 he was re elected for 4 years
∙ He is elected as B’ Vice President of the Association of Greek Regions and Chairman of the Committee of Agricultural Development ∙ He is an elected member in the European Committee of the Regions
As a member of the Administration of the Engineers Association in Ioannina has a rich trade union action and as a member of the Hellenic Association of Qualified Engineers and Constructors for public work.
For many years he has dealt with the Vlach-speaking Hellenism in Greece and throughout the Balkan region
Throughout his political journey, he worked hard and promoted effectively a number of important projects and infrastructures for the development of his area such as the improvement of the quality of life of citizens, the enhancement of the cultural heritage and the protection of the natural environment.