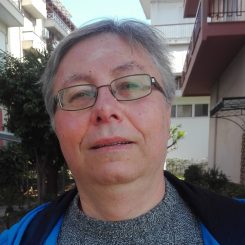 Anastasios Drosopoulos is a  Professor at the Electrical and Computer Engineering Department of the University of Peloponnese. He received his BSc (Physics) from the University of Patras, Greece, and both the MSc (Physics) and PhD (Electrical Engineering), from McMaster University, Hamilton, Ontario, Canada, in 1987 and 1992 respectively. From 1991 to 1997, he worked at the Defense Research Establishment, Ottawa, Canada, with the Spaceborne Synthetic Aperture Radar

group, where he did applied research in the areas of modeling of microwave scattering, propagation and statistical detection from sea clutter. In 1997 he joined Nortel, Ottawa, where he worked in the area of optical communications, designing and testing DSP software to improve performance of DWDM Erbium doped optical amplifiers. In 1999 he joined the Atmel Multimedia and Communications group in Patras, Greece, where he worked in wireless network applications. In

2003 he joined the Technological Education Institute of Western Greece (formerly TEI of Patras) as a Professor of Electrical Engineering. In 2019 the Engineering School has been integrated into the University of Peloponnese and he is now a member of the Electrical and Computer Engineering Department.  His research interests include applications and modeling of communication and electrical energy systems