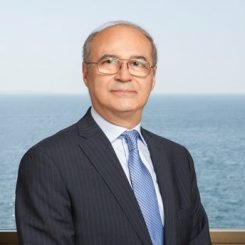 Aristotelis Spiliotis , since March 2019, serves as Secretary General of the Black Sea Trade and Development Bank (BSTDB) . He is a national of Greece, born in 1965. He holds a Ph.D. degree from the University of York, UK, in Money, Finance and Banking and a B.Sc. degree in Economics from the University of Piraeus, Greece. He also holds a certificate from the Hellenic Capital Market Commission, Greece as a Certified Investment Portfolio Manager . Dr. Spiliotis started his professional career (1994) as an Investment Director of the mutual funds company DIETHNIKI S.A., NBG Group. In 1999, he co-founded and managed a venture capital fund, 4E. He has served as Vice President of the Hellenic Venture Capital Association. He was board member in several Greek companies and banks. He was Director of Investment Participations of Omega Bank and Proton Bank, Chairman of the Board of the Omega Mutual Fund Management Company, Board member and Chairman of the Investment Committee of the business incubator Thermi S.A. and Board member of Panellinia Bank. He has served as Vice-President of the Hellenic Venture Capital Association and as the Representative of the Greek Association of Mutual Fund and Investment Fund Companies in the Economics and Statistics Committee of the European Federation of Investment Funds and Companies (F.E.F.S.I.). In 2012, he joined Bank of Greece in the Economic Analysis and Research Department . In 1989-92, he was teaching in the UK universities of York and Leeds and he is currently lecturing in Greek universities. He has published several articles in scientific and professional journals. He is married and has two children.