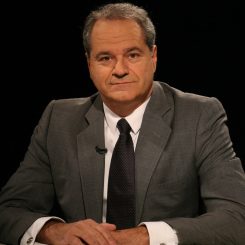 Athanasios Ellis is Editor in Chief of Kathimerini English Edition which is published in Greece and Cyprus along with the New York Times as a single paper.

He has appeared on international media to analyze issues relating to Greece, from national elections and the economic crisis to relations with Turkey.

He holds a B.A. from Boston University in Economics and Political Science, and a M.A. from B.U. in International Relations.