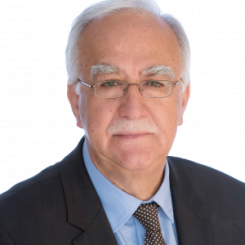 Born and raised in Kalavrita, Region of Achaia. He studied economics at the Athens University of Economics and Business.

In 1983, he undertook the role of the General Manager at the “Union of Agricultural Cooperatives” (EAS) of Kalavrita until December 31, 2020. A position from which he worked systematically, for thirty years, to restructure the organization and support the income of farmers and stockbreeders of the Kalavrita region and the broader area, contributing to its development and promotion as one of the most important cooperative organizations in the country.

In the municipal elections of 1998, he was elected Mayor of the expanded Kapodistrian municipality of Kalavrita, a position in which he was re-elected for two additional terms.

Moreover, he was elected as a Member of Parliament for Achaia region in the National Elections of 2009, with PASOK political party.

During the period 2009-2012 he was a Member of the Standing Committees of the Greek Parliament, National Defense & Foreign Affairs, and Production and Trade.

During the years 2012-2016, his role was instrumental, in the establishment and construction of a new cheese making unit in ​​Amfilochia region, named AMFIGAL. Additionally, during the same period, he was actively involved in the program of the Ministry of Rural Development and Food for the Marketing and Promotion of Feta in U.S., with the participation of the Agricultural Dairy Cooperative of Kalavrita (former EAS).

During Municipal elections on the 26th of May 2019, he was elected Mayor of Kalavrita.

He is also the President of the “Regional Association of Municipalities of Western Greece”, as well as President of the Boards of Directors of the “Ski Center of Kalavrita”, “Achaia – Development Agency S.A.” and the “Network of Martyr Cities and Villages of Greece in the period 1940-1945 HELLENIC HOLOCAUSTS”.