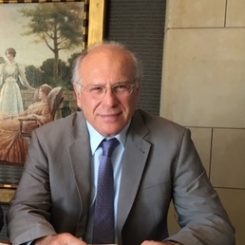 Mr. Kavalopoulos is a graduate of the National Technical University of Athens – School of Mining and Metallurgical Engineering.

In 1998 he took over as General Manager of Operations of the Hellenic Post, a position he took after evaluation under law 2414/96.

Until September 2000 he was responsible for the operation of the entire postal network.

In 2001 he took over as General Manager of the SABO group having the responsibility of 4 separate companies that specializes in the design and construction of production lines of products such as special construction projects.

In 2002 he deals with construction companies and from various positions of responsibility.

In 2003, until his assumption of duties in the Association of Mining Companies, he was the technical director of the marble quarries of Dionyssos Pentelis.