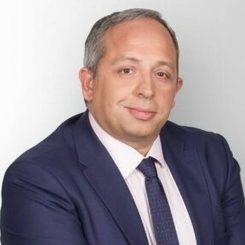 Christos Koutras was born in Tripoli Arcadia in 1973. His first steps in journalism were in 1996 in local networks and radio stations. Leaving his birth land he moved in Athens where he joint Antenna Group in 1998 after graduating Antenna school of journalism. He continued in the Greek public network ERT until 2007. Today his has his own TV and radio show in Skai TV, where he started working in 2007 covering government news in a very difficult economic period of Greece. He has worked in newspapers magazines and news websites. He is married and has two children.