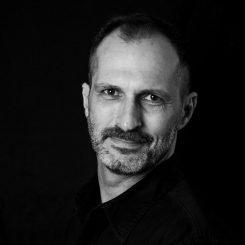 Constantinos Davlos is a Journalist at the Greek Television Station SKAI. He is working at the television industry since 2000 as an editor in economic matters, at the TV stations New Tempo, Alpha TV, Channel 9 and SKAI, while at the beginning of his carrier he worked at Greek newspapers and magazines.

He has a Master’s Degree in Mass Communications from the University of Leicester and a Bachelor’s Degree in Sociology from the Deree College – The American College of Greece. Prior to that he studied Journalism at the Hellinofono Collegio in Athens.

Although he is dedicated to his work, as a hobby he plays Baseball (a sport almost unknown to Greeks). At the pick of his amateur carrier he participated with the National Greek Team at the World Cup of 2010 played in Panama. Also, for more than a year now he is the trainer of a children and teenagers’ Baseball team called “Gigantes”. He is also the owner of a site dedicated to Baseball.