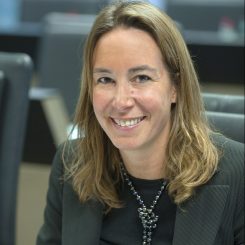 Debora Revoltella is the director of the Economics Department of the European Investment Bank, and has held this position since April 2011. The department provides impact-driven economic analysis to support operations, the global positioning as well as the policy and strategy definition of the bank. Debora holds a degree in economics and a masters in economics from Bocconi University as well as a PhD in economics from the University of Ancona in Italy. After the experience as an adjunct professor in macroeconomics at Bocconi University, Debora joined the research department of Banca Commerciale Italiana, a leading Italian Bank. In 2001, she joined UniCredit as the chief economist for Central and Eastern Europe. During these years, the department developed into a leading research centre for the region. Debora is a member of the Steering Committees of the Vienna Initiative and the CompNet, and a member of the Boards of the Joint Vienna Initiative, the SUERF and the Euro 50 Group.