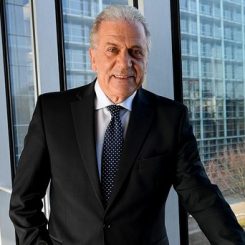 Mr. Avramopoulos served in the Diplomatic Service of Greece from 1980 until 1993. He was Spokesman of the Ministry of Foreign Affairs, Director of the Diplomatic Cabinet of the Greek Prime Minister and Consul of Greece in Liège (Belgium) and in Geneva (Switzerland).

He is married to Vivian and has two sons, Filippos and Iasonas.