Secretary General of the Central Union of Municipalities of Greece (KEDE) 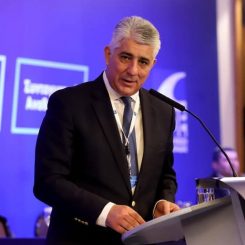 Dimitris Kafantaris was born in 1967 in a small village in the historic Municipality of Pylos-Nestoros.

He started his course in local government course very early, making his first small “step” at the age of just 27, the youngest, then Messinia’s Prefectural Councilor.

Within the framework of his duties ,he participates in many working groups, committees, and conferences.

He is married and the father of a daughter and a son.