Member, Organization for Security and Co-operation in Europe 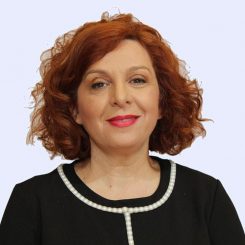 She studied Biology at the Faculty of Natural Sciences in Tirana University and  holds a master degree in Aerobiology from Faculty of Natural Sciences and a PhD from Worcester University in cooperation with Coventry University in the United Kingdom. She has published numerous research articles and participated in many international conferences. Mrs. Gjebrea received awards for her scientific dedication and achievements.

With a background in academia and civil society, in 2013 she became Deputy Minister of Internal Affairs and National Anti-Trafficking Coordinator, a position she held until 2017.

She was also Municipality councillor of Tirana city, representing the socialist party from 2015 to 2017. In 2016 she was part of the General Assembly of the Socialist Party.