Member of the Hellenic Parliament, President of Kinima Allagis (KINAL) 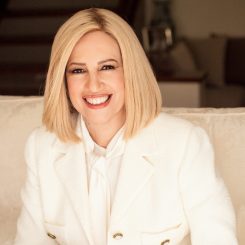 Fofi Gennimata was born in Athens in 1964. She graduated from the University of Athens Law School (Department of Political Science and Public Administration) in 1987.

Her political career started in 2000 when she was elected Member of Parliament with the Panhellenic Socialist Movement (PASOK) representing the 1st constituency of Athens.

In 2003 she was elected Super-Prefect for Athens and Piraeus in the Local Administration Elections, position she held until 2007. During the same period she served as President of the Prefectures Union of Greece.

In March 2012 she was appointed Press Representative of PASOK.

From June 2013 until January 2015 she served as Alternate Minister of National Defence.

In both the General Elections of January 2015 and September 2015 she was elected Member of Parliament with PASOK representing the 2nd electoral prefecture of Athens (1st in votes).

In June 2015 she was elected with significant majority President of PASOK and Head of its Parliamentary Group.

In November 2017 she was elected Leader of the newly formed Party “MOVEMENT OF CHANGE” (KINAL) and President of its Parliamentary Group.

In June’s 2019 General Elections she was re-elected Member of Parliament in the 2nd electoral prefecture of Athens.

Fofi Gennimata is married and mother of three children