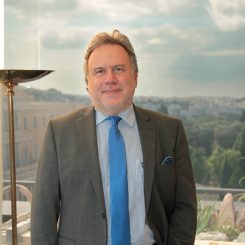 George Katrougalos, former Foreign Minister of Greece, is Professor of Public Law at Democritus University of Thrace, currently Member of the Hellenic Parliament for SYRIZA party.

He is, since 2021, President of the Sub-committee on the Middle East and the Arab World of PACE and since 2019, Vice Chair of the Group of the United European Left at the Parliamentary Assembly of the Council of Europe (PACE)

He was Alternate Minister of Interior and Administrative Reconstruction (January-July 2015), has served as Minister of Labour, Social Security and Social Solidarity (September 2015-November 2016), as Alternate Minister for Foreign Affairs responsible for European Affairs and International Economic Relations (November 2016 – February 2019) and as Minister of Foreign Affairs (February 2019-July 2019). Since he was a student he participated in youth movements and democratic struggles. He was secretary of the Board of Law Students Association of Athens and President of the Association of Greek Students in Paris.

Between 2000 and 2003 he was advisor to the Greek Permanent Mission to the United Nations for the works of the 3rd Committee of the UN General Assembly and a member of the committee of experts advising the Ministry of Foreign Affairs on the drafting of the European Constitution.

He has taught at several Universities in Europe, the USA and India. He has been a visiting scholar at the Law School of New York University (2007 and 2012), as Emile Noel Fellow and Senior Emile Noel Fellow, respectively, and at Roskilde University (1994-1995), as a fellow of the Danish Academy of Science. He used to be a member of the board of KETHEA (Therapy Center for Dependent Individuals), of UNICEF Greece, of the Association of Greek Experts on Constitutional Law and founding member of the Audit Committee of Public Debt. He has published extensively in Greek, American and European legal reviews.