Former Prime Minister of Greece (2009-2011), Member of Parliament with the Movement of Change (KINAL) 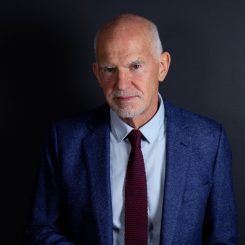 First elected as MP in 1981, he served in many governmental posts. As Minister of Education (1994-1996), he founded the Greek Open University and promoted multicultural programs. As Minister of Foreign Affairs (1999-2004), he promoted peace building and European integration in the Eastern Mediterranean and the Balkans and managed a breakthrough in Greek-Turkish relations. An active supporter of the information society and e-democracy, in 2003 Papandreou was selected as one of the “25 People Who are Changing the World of Internet Politics”. In 2004, Papandreou was elected leader of PASOK in the party and country’s first open primary – a move highly symbolic of his commitment to participatory governance.

Throughout his political career, he has championed human rights at home and abroad, and has actively sought to maximize citizen participation in governance through information technologies. Since 2006, he is the President of the Socialist International, the largest global political family. Around the world, Papandreou has deployed ‘Green Diplomacy,’ calling for the protection of the environment and for placing sustainable development at the epicenter of policy-making and multilateral cooperation.

During his premiership (2009-2011), he applied a series of structural reforms in his attempt to modernize his country whilst avoiding bankruptcy in Greece’s 2010 debt crisis. For his achievements related to government Transparency, he received the Quadriga Award in the category “Power of Veracity”. In 2010, he was named one of the Foreign Policy magazine’s TOP 100 Global Thinkers. In 2017, he was honored with the International Leadership Association (ILA) Distinguished Leadership Award.

Papandreou graduated from Amherst College and holds an M.Sc. in Sociology and Development from London School of Economics. He was a fellow at Harvard University’s Center for International Affairs (1992-1993) and the Institute of Politics (2012). In 2013, he served as a Global Fellow and Adjunct Professor at Columbia University’s School of International and Public Affairs as well as a faculty member in the Master of Public Affairs program at Sciences Po in Paris.