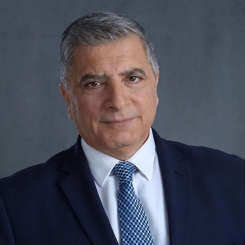 Mr. Patoulis was born in Athens. He entered Athens Medical School in 1981 and specialized in Orthopaedic surgery at the Athens ‘Laiko’ Hospital, where he wrote a doctoral thesis on the subject of his specialization. Being a doctor is fully in line with his character and his beliefs that he should be useful to people and contribute to the society as a whole. At the same time, being a restless spirit and a ‘man of action’ interested in the contemporary needs of society, he also specialised in Health Economics and graduated from the National School of Public Health. He holds a PhD of the Athens School of Medicine. At the same time, he has been involved for many years in trade unions.

He worked in the Hellenic Social Insurance Institution (IKA) at the areas of Tavros, Amaroussion, Erythraia and Lykovrysi. He was also a Scientific Collaborator at “ERRIKOS DYNAN” and “ATHINAIKI KLINIKI” hospitals. His trade union experience dates back in 1995, when he founded the Athens & Piraeus Association of Specialist Physicians (SEIAP). He served as the President of the Association for 3 consecutive years (1995-1998). In 1997, he established the “Young Doctors” Pan-Hellenic Society and he served there as President until 2004.

His involvement and contribution to society started as a member of the “Young Doctors” society; he has offered voluntary work by participating in visits in Greek islands near the border, preventive information lectures at Local Authorities, school medicine etc. He is the founder and chairman of the Union of Professional Doctors of Attica (E.E.L.I.A.) (2002). For 8 consecutive years, he has served as member of the Board of Directors of the Athens Medical Society (I.S.A.) and Vice-President for 3 years. In 2011 and 2018 he was elected Ρresident of the Medical Association of Athens (I.S.A.), a position he holds until today.