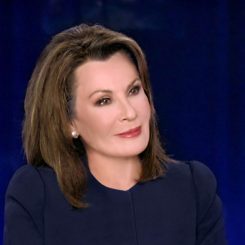 Gianna Angelopoulos-Daskalaki is an ambassador-at-large of the Greek Republic. She studied law and has practiced law.

She has been involved in public service since 1986, initially elected as a City councillor for the Athens Municipal Council and later as a member of the Greek Parliament, where she was first elected as an MP in 1989 and re-elected in 1990. Following her marriage to Theodore Angelopoulos, Gianna resigned her seat in Parliament to focus on family and business.

In 1996, she led the country’s successful campaign to host the 2004 Olympic Games. In 2000, she was called upon to come to the rescue and assume the Presidency of the Athens 2004 Organizing Committee where she spearheaded the drive to organise the 2004 Olympic Games, ensuring the project was a resounding success. In her book, My Greek Drama, which was published in May 2013 and became a top-ten New York Times and Wall Street Journal bestseller, she recounted her experience on how she overcame obstacles in an asphyxiating time frame to make up for slow progress and gridlocked bureaucracy that had jeopardized the Athens Games prior to her taking the helm of the Athens 2004 Organizing Committee.

At Harvard, Ms Angelopoulos has served as vice-chairman of the Dean’s Council of Harvard’s Kennedy School of Government since 1994 and now also serves as a member of the Advisory Board of the Center for Business and Government. In 2011, she established the Angelopoulos Global Public Leaders Program at the HKS to bring distinguished leaders to Harvard in order to interact with students, share lessons learned and reflect upon the next phase of their public service. Distinguished personalities including President Felipe Calderon of Mexico, President Tarja Halonen of Finland, President and Nobel Laureate Juan Manuel Santos of Colombia and U.N. Secretary General Ban Ki-Moon have participated in the program to date.

In October 2019, she established the Gianna Angelopoulos Programme for Science Technology and Innovation (GAPSTI) at Cambridge University, which nurtures exceptionally talented early-career scientists, from postgraduate study and research to the successful commercialisation of their ideas, through a structured training and research programme enhanced by industrial collaboration and entrepreneurial activities.

In 2019, Greece’s Prime Minister Kyriakos Mitsotakis appointed her as an ambassador-at-large and President of the “Greece 2021” Committee for the celebrations of the bicentennial anniversary of the commencement of the Greek Revolution in 1821.

Ms Angelopoulos is the founder and sponsor of the Angelopoulos CGIU Fellowship Program, through which 100 young Greek entrepreneurs have benefited, as well as a leading philanthropist for projects in Greece and around the globe. She is a proud mother of three grown children and has three granddaughters.