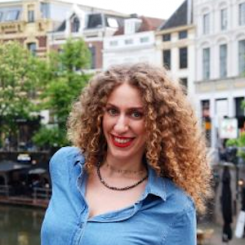 Lydia Papadaki is a PhD candidate at the Athens University of Economics and Business and also she is the manager of UN SDSN Greece and EIT Climate-KIC Greece. She works as a researcher in the following EIT Climate-KIC projects: Deep demonstration of maritime systems innovation in Piraeus, Climate innovation in Southern European Waters, Circular Economy Transition in Smart Specialization Strategy in RIS countries and Circular Learning Hub. Previously, she worked as a researcher at the International Centre for Research on the Environment and the Economy (ICRE8) at the DAFNE (H2020) project. She received her M.Sc. in Economics and policy of Energy and the Environment at University College London (UCL), and her BSc (Distinction) in Economic theory and policy at Athens University of Economics and Business (AUEB). While completing her first degree in Athens, Lydia was engaged in the AUEB debating club as debater, committee and after judge participating in Greek and International Championships (EUDC 2016). Her main areas of interest are economics, environmental economics, renewable energy, Climate change and sustainable development.