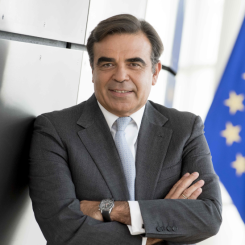 Margaritis Schinas took office as Vice-President of the European Commission under President Ursula Von Der Leyen in December 2019. He is entrusted with the portfolio for Promoting our European Way of Life. In this capacity, he oversees the EU’s policies for Migration, Security Union, Social rights, Skills, Education, Culture & Sports, Youth, Public health, Interfaith dialogue and the Fight against antisemitism.

Born in Thessaloniki in 1962, Margaritis Schinas holds an MSc on Public Administration and Public Policy from the London School of Economics, a Diploma of Advanced European Studies on European Administrative Studies from the College of Europe in Bruges and a Degree in Law from the Aristotelean University of Thessaloniki.

He is married and has two children.