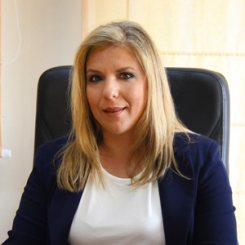 Vice-president of Women of the European People’s Party (EPPWomen)
Graduate of Philosophy School of the National and Kapodistrian University of Athens. Master Degree in Business Administration for Executives of the Athens University of Economy and Business (AUEB) and thesis in Policy and Strategy of New Public Management.
Experienced in neuralgic positions, both in private and public sectors, specializing in human resources.
Former Vice-president of the YEPP (Youth of the European People’s Party), from 2001 until 2005 and representative of YEPP at the Western Balkan Democracy Initiative and the Southeastern European Forum, in the same period.
Former member of the Executive Bureau of ONNED (youth organisation of Nea Demokratia, political party), in charge of International Relations, from 2001 until 2004 and in the Central Committee from 1998 until 2005.
Candidate with New Democracy in the 2004 European Elections.
Former Vice-president of KETHI (Research Centre for Gender Equality) from 2013 until March 2015.
Member of the Economic Chamber of Greece.
She speaks English, French and Turkish.
Married to Fotis Kyriakopoulos, Civil Engineer and mother of two children, Vasilis and Konstantinos.
Follow us on Social Media
facebooktwitterinstagramyoutubelinkedin