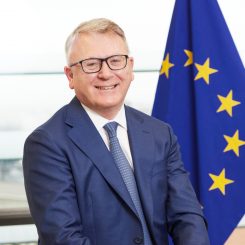 Nicolas Schmit took up office as European Commissioner responsible for Jobs and Social Rights in December 2019. Prior to this, and following a long career of public service in his native Luxembourg, he took up duty as Permanent Representative of Luxembourg to the EU in 1998 for a six-year term. In 2004, he was appointed Minister Delegate for Foreign Affairs and Immigration.

From 2009 to 2018, he held the position of Minister for Labour and Employment in the Luxembourgish government. He served as a Member of the European Parliament for the social-democratic Lëtzebuerger Sozialistesch Aarbechterpartei following his election in May 2019. Nicolas Schmit holds a Doctorate in International Economic Relations and a Masters in French Literature from the University of Aix-Marseille.