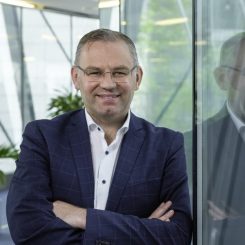 Norbert Lins, MEP, has been the Chair of the Committee on Agricultural and Rural Development (AGRI) since his second mandate in the European Parliament in 2019. He was first elected as a member of European Parliament in 2014, where he was a member of the AGRI Committee and the Committee on the Environment, Public Health and Food Safety (ENVI Committee). Lins grew up on his family’s farm in Danketsweiler, hence he can relate well to the situation of farmers.

Prior to that, Lins was a consultant for promotion of broadband from 2011 to 2014 and also worked as a personal assistant to the Minister of Agriculture Rudolf Köberle in the Ministry of Rural Affairs and Consumer Protection in Baden-Württemberg (2010 -2011).

Lins holds a Master degree in “European Administrative Management” from the University of Applied Sciences in Ludwisburg and Kehl, Germany.