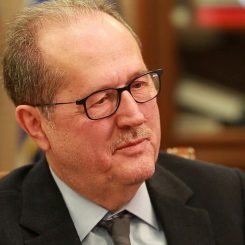 Panagiotis Nikas was born in Kentro Avias (at the Mani region) in 1950. He  studied Literature and Political Science at the National and Kapodistrian  University of Athens.

For many years he worked as a highschool teacher in Kalamata. Since the start of his career he has been an active member of the teachers’  unions and was repeatedly voted for by his colleagues as their  representative in numerous elections.

Panayiotis Nikas was elected as the new Regional Governor of Peloponnese  and assumed office on the 1st of September 2019.

He is married to Anastasia Militsi, PhD, Head of the National Archives of  Messinia and has three sons: Vangelis, an Electrical and Computer Engineer  with a PhD, Elias a Medical Doctor assistant University Professor and  Nicholas a Civil Engineer, MSc.