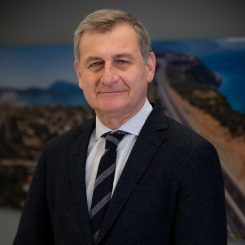 Dr. Panayiotis Papanikolas is a distinguished scientist in the field of Structural Engineering, and General Manager in Greece for the concessions division of VINCI Group, while he manages two large concession project companies, namely OLYMPIA ODOS S.A. and GEFYRA S.Α.

Between an academic career and the construction of major infrastructure projects, he chose the second, since in the very year he was elected Associate Professor in the Civil Engineering department of the University of Alberta he was proposed the position of Chief Technical Officer for the Design and Construction of the Rion-Antirion Bridge in Greece, a innovative project, at the late ‘90s.

In early 2014, he undertook the completion of one of the most difficult projects in Greece, in both managerial and technical terms, i.e. Olympia Odos Motorway.

He has been awarded with the Legion of Honor by the French Republic, with the rank of  Chevalier of the Ordre National du Mérite.

He was born in Congo, Africa and has two nationalities: Greek and Canadian.