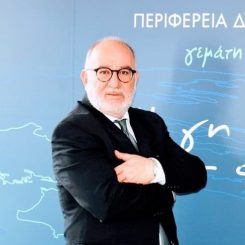 Panos Sakellaropoulos is Chairman of the Economic Committee and Deputy Regional Head of Economic Policy and Financial Control of the Region of Western Greece.

He originates from the area Peristera  of ​​Nonakrida of the Municipality of Akrata and lives permanently in Patras. He is married to Mrs. Lamprini Pliakoura, Aesthetician and Business Executive

He was elected in the Regional Elections for the third time in 2019 with the combination of Nektarios Farmakis  “OLA APO THN ARXH”, having achieved first place in the previous two.

He is an executive in the Independent Public Expenditure Authority (AADE) -Ministry of Finance.

His studies concern the Marketing – Management and the European and Greek Culture of the Hellenic Open University.

He has worked in companies in the private sector, with responsibility for the sales sector  since 1982 and Sales Manager of S.W. Greece in the company UNITED DISTILLERS BUTARI.

He has a rich social, trade union and political activity, while among others he has been elected:

He is also an active member of the Association of Social Welfare and Perception.

His interests in addition to his involvement with the public, include music, theater, hunting, mountaineering, chess, reading, horseback riding and football.