President of the NAT Section, European Economic and Social Committee 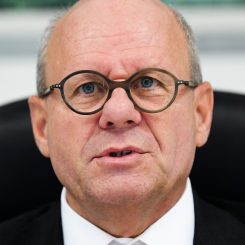 Born in 1962, Peter Schmidt’s first occupation was cheesemaker. Later on he was a regional officer of the NGG trade union (Food and Catering Union, affiliated to the DGB) for 27 years, in charge of dairy industries and bakeries. Since 2014 he has been a member of the European Economic and Social Committee (EESC)’s Group II (Workers). From 2015 to March 2018, he was the president of the EESC’s Permanent Study Group on Sustainable Food Systems. From April 2018 to September 2020, he was the president of the EESC’s Sustainable Development Observatory and one of the three EESC members steering the work of the European Circular Economy Stakeholder Platform, a joint initiative by the EESC and the European Commission. Since October 2020, Peter is the President of the NAT Section of the EESC, responsible for Agriculture, Rural Development and Environment.