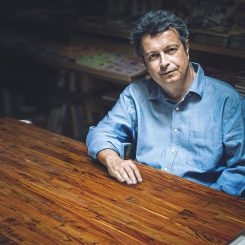 Petros Tatsopoulos was born in Rethymno, Crete, in December 1959. He grew up in Athens. He studied economics and political science. He worked as a trainee social worker, co-screenwriter for A foolish love (1981) by George Panousopoulos and Underground Passage (1983) by Apostolos Doxiadis, as well as journalist, book reviewer, publishing consultant and presenter of the cultural programs on public and private television Spirit of Controversy (ET1, 1999-2000), Great Greeks-Eleftherios Venizelos (SKAI, 2009), 1821 (SKAI, 2011), and Bras de Fer (Action 24, 2014).

Some of his short stories and novels have been translated into English, French, German, Turkish and Czech. He was member of the board of the Writers’ Society from 2001-2003, chaired at the time by Vassilis Vassilikos, and he served briefly as vice president of the National Book Centre in 2010. He served as member of the Greek Parliament (2012-2015) as well as the Greek parliamentary delegation at the Council of Europe Parliamentary Assembly (2012-2013). He has two children, Giannis and Danae.