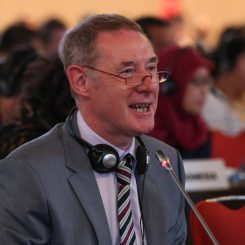 Mr. Philip Owen joined the European Commission in 1990 having spent 12 years in the private sector. He spent a number of years in DG Competition, followed by three years in DG Regional Policy. He was in DG Environment from 2002 to 2010 having been in charge of the DG’s financial management as well as its project funding initiative. Philip Owen moved to DG Climate Action, in mid-February 2010, to deal with climate action policy for road vehicles and fuels as well as dealing with ozone and fluorinated gas issues and the UN’s Montreal Protocol. From 1 January 2016, his work encompasses climate finance, mainstreaming climate action into the Commission’s spending as well as the Montreal Protocol.