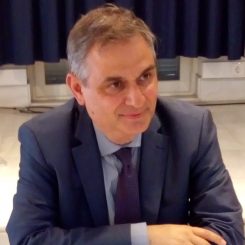 Philippos Sachinidis was born in Canada in 1963. He studied Economics at the University of Piraeus (1986) and received his M.A. in Economics from Queens College, City University of New York (1989). He holds a Ph.D. from the University of Manchester (1994). Philippos Sachinidis has been an economist for National Bank of Greece and served as an economic advisor to Greek Prime Minister Costas Simitis between 2000-2004. In 2007 he was elected as an MP for the Panhellenic Socialist Movement (PASOK). He was reelected in October 2009, May 2012 and June 2012. He became Deputy Minister of Finance on October 2009 and Alternate Minister of Finance on June 2011 in the government of G. Papandreou. On March 2012, he became Minister of Finance under Prime Minister Lucas Papademos serving until May 2012.