Vice President & Head of Marketing and Exports Departments of Loux SA, President of the Chamber of Achaia & of EFEPAE 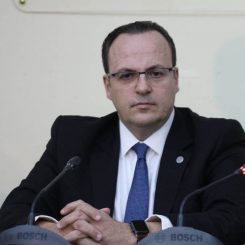 Platon Marlafekas is Vice President and Head of the Marketing and Exports Departments of Loux SA, the largest, Greek-owned, soft drink and juice company in Greece, that complements 70 years of tradition and history.

He was born in 1972. While very young he started working in the company, making himself familiar with all production and trade stages and was guided by his father and founder of Loux, Mr. Panagiotis Marlafekas.

He has studied Computer Programming – Analysis and Marketing and he speaks English. Along with his brothers, he took over the company’s administration after their father retired in 1989, and applied a growth plan that led Loux among the top ranking Greek businesses in the market. Today the company has an international presence in 27 countries.

Platon Marlafekas is also active in the business and social life of Achaia and has been elected as the President of the Chamber of Achaia twice, once in 2012 and once in 2017 .Furthermore, he is one of the founding members and member of the Board of Directors of the Initiative “ELLA-DIKA MAS”, a union that includes certified enterprises for their Greek headquarter, Greek production and Greek ownership, which aim to boost Greek Economy. At the same time, he is the First Vice President of the Regional Chamber Council of Western Greece. He also represents the Chamber of Achaia in the European Parliament within the European Parliament of Entrepreneurs of the European Chambers since 2016. He is also the President of the Management of European Programs of the Western Greece – Peloponnese – Epirus and Ionian Islands since 2015.

Furthermore, he has been member of the Board of Patras Motorway SA (from 2004 until 2005 and then from 2009 until today) and of Patras Science Park during 2013-2015. He is also responsible for the Presidency of the Organizing Committee of PICK (Patras International Circuit for Kart) since 2009, and he was elected in 2017 and in 2018 as member of the Board of Directors of the think tank called «REVMA». He has also been Vice President of the Board of the Coastal Mediterranean Games held in Patras in 2019. Recently, since July 2020, he is a Member of the “Organizing Committee of Motor Sports Organizations”, with a two-year term. At the same time, in February 2021 he took over the presidency of the Regional Chamber Council of Western Greece and later this year he was elected President of EFEPAE (Intermediate Body of the Competitiveness / Entrepreneurship Business Program).

In 2009 he was given, along with his brothers the “Kouros” award -founded by the Entrepreneurship Club for “Development and Innovation”. In addition, he was awarded with the prize for “Business Excellence” at the ceremony of Made in Greece Awards, which were first introduced in 2013 by the Greek Marketing Academy. He was awarded with the same prize in 2015 and 2017, while in 2014, he received another, highly important distinction by the Athens Chamber of Tradesmen for “Innovation and Creative Entrepreneurship”. In 2016 after Loux was named as “Public National Champion”, the company took part in the European Business Awards and was nominated for the title of “Overall European Public Champion” along with 31 other top enterprises.

In 2017, Loux was also named as a “Superbrand” at the Corporate Superbrand Greece awards, confirming its steadily upward business performance, a distinction repeated in 2018-2019. More recently, the company received a distinction of “Regional Excellence” at the “Greek Value” awards Ceremony in 2019, from the Hellenic Industries Association (SBE) while the innovative series loux  plus ‘n light and loux plus’ n light tea stood out at the Healthy Diet Awards 2020. At the same time, the firm was honored as “Business and Tradition” at the EVEA 2020 AWARDS while at the recent RETAILBUSINESS AWARDS it was distinguished in the category SUPPLIERS ‘BRAND CAMPAIGN. Finally, Loux was awarded at the annual meeting of business Excellence “Diamonds of the Greek Economy 2020”. In addition, as a Centennial Brand for its 70 years of history and tradition, it stood out at the event of the 20th Annual Marketing & Sales Conference, receiving a Gold Medal. Starting dynamically in 2021, the company won the “Export Leaders Awards” for its performance in the field of extroversion at the “EXPORT LEADERS FORUM 2021”, while more recently it was distinguished as a key supplier of the largest supermarket chains at the Commerce and Industry Awards 2021.