Member of the Hellenic Parliament (SYRIZA Party), Former Minister of Environment and Energy 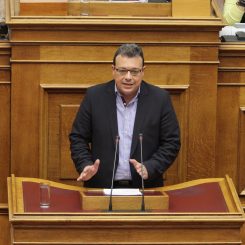 Born in Athens in 1966, but raised in Thessaloniki

Studies: Diploma in Chemical Engineering from the Aristotle University of Thessaloniki, MSc in Environmental Planning and Management from the Hellenic Open University

• Member of the municipal council of Thermi from 2006 till 2015. He served as Vice Mayor, President of the Public Consultation Committee and President of the Thermi Municipal Enterprise for Culture, Environment and Sports

• Former member of the Committee for Environment, Land Use and Infrastructure of the Central Union of Greek Municipalities (KEDE)