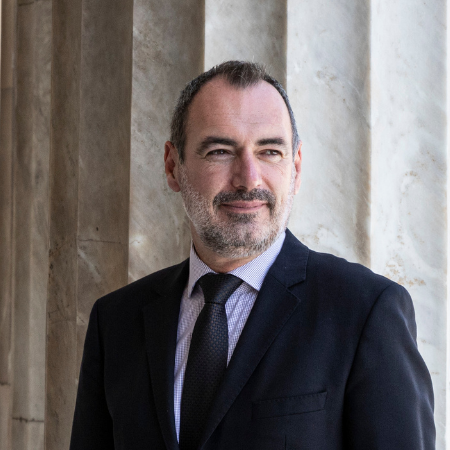 Andreas Katsaniotis was born on November 28, 1969, in Lappa of Achaia and was raised in the city of Patras.

He is a graduate of the Department of Natural Resources Development and Agricultural Engineering of the Agricultural University of Athens.

From 1999 to 2001 he worked as a manager in several new technology companies.  From 2001 he was also appointed as Marketing and Public Relations Director of the newspaper “Kathimerini”, in charge of the promotion strategy and the development of international cooperation. From 2007 to 2009 he was the Managing Director of the Hellenic Export Promotion Organization. Subsequently, he established his own communication consulting company for media, “ASAP”.

From 2012 to 2014 he served as the Secretary General of Information and Communication, in charge of Public Diplomacy and the coordination of the promotion of the image and communication strategy of Greece, domestically, but mainly abroad, in the international media. At the same time he was the Head of the Working Group for the creation of Branding Greece.

In February 2014 he was candidate for Regional Governor of Western Greece.

In January 2015 he was elected as MP for the Prefecture of Achaia.

In November 2015 he was appointed as the Deputy Secretary of the Parliamentary Group of the New Democracy party. He was re-elected in the elections of September 2015 and July 2019.

On September 10, 2020, he was elected Chairman of the Special Permanent Committee on Research and Technology of the Hellenic Parliament.

On August 31, 2021, he was appointed by Prime Minister Kyriakos Mitsotakis as the Deputy Minister of Foreign Affairs, in charge of Diaspora Greeks.