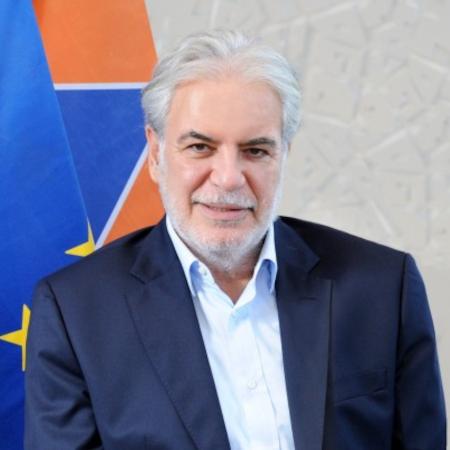 Christos Stylianides has been the Minister of Climate Crisis and Civil Protection of the Hellenic Republic since September 10, 2021.

From 2014 to 2019 he served as European Commissioner for Humanitarian Aid and Crisis Management. During the same period, he was EU Ebola Coordinator after his appointment by the European Council.

From these positions he undertook important initiatives to address the effects of climate change. He is considered the “architect” of rescEU, the bold initiative that significantly upgraded the European civil protection system.

Christos Stylianides was also elected Member of European Parliament of the Democratic Rally-European People’s Party (2014) of Cyprus. In two different periods he served as Government Spokesperson of the Republic of Cyprus (2013-2014 and 1998-1999). During the period 2006-2013 he was a Member of the House of Representatives of the Republic of Cyprus (elected in 2006 and 2011 with DISY) with a rich parliamentary record. From 2006 to 2011 he was also a member of the OSCE Parliamentary Assembly and was elected a Member of its Bureau in 2012.

In May 2021, he was appointed EU Special Envoy for Freedom or Religion or Belief (FoRB).

In recognition of his work, Christos Stylianides received important honorary awards from governments and international organizations and institutions. Among others, he received the Golden Decoration of Honour by the Federal Agency for Technical Relief (THW) of the Federal Republic of Germany and the Honorary Award of Civil Protection of the Land of Baden-Wurttemberg (Germany) for his contribution to the upgrading of the European civil protection system. He was also named “Global Champion for Education in Emergencies” by the international organization Education Cannot Wait (ECW) and “Political Champion for Education in Emergencies” by the Malala Foundation. For his humanitarian action and contribution to coexistence and reconciliation he was awarded the “Peace and Reconciliation Prize” of the historic city of Guernica, Spain.

Christos Stylianides was born in Nicosia, Cyprus on June 26, 1958.