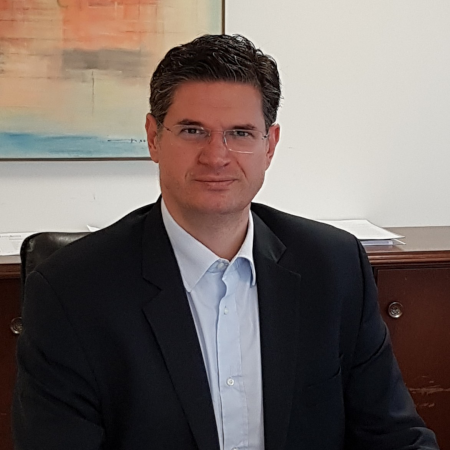 Studies:
He graduated from the :
• Law School – National and Kapodistrian University of Athens,
• Faculty of Philosophy – University of Ioannina
• Postgraduate program of Master of Science in European Studies – Athens University of Economics and Business.
Foreign Languages:
English, French

Political/Social Activities
He served as:
• General Secretary at the Ministry of Maritime Affairs and Island Policy (2017-2018).
• Governor of IKA-ETAM Social Insurance Institute (2015-2016).
Since 2003, he has been working as a lawyer, specialized in labour, public and social insurance law.
In 2012-2014: He participated in the Committee for the Control of Parliamentary work of the Ministry of Labour Social Security and Welfare, for the parliamentary group of SYRIZA.
In 2012-2013-2016: He acted as conventioneer at the Conference of SYRIZA-UNITARY SOCIAL FRONT and the Congresses of SYRIZA.
In 2010 he was candidate Regional Councilor in the Local & Regional list with SYRIZA political party.