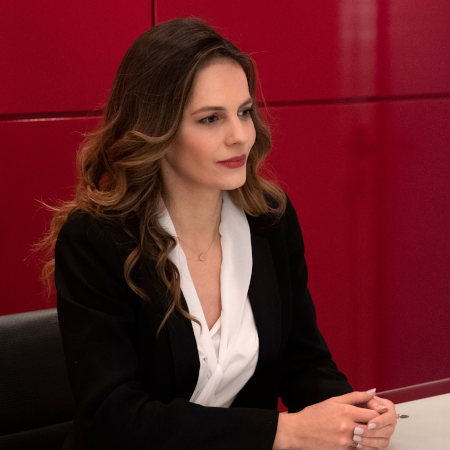 Effie Achtsioglou (@E_Achtsioglou) is Member of the Hellenic Parliament (SYRIZA party) and former Minister of Labour, Social Security and Social Solidarity. She is SYRIZA’s Shadow Minister of Finance.

She is a lawyer and holds a Phd in European Labour Law and a Master’s degree in Public Law and Political Science.

Effie Achtsioglou has been the Minister of Labour, Social Security and Social Solidarity from November 5th 2016 until July 9th 2019. She has been Head of the Minister’s Cabinet, at the Ministry of Labour, Social Security and Social Solidarity and she was the Ministry’s chief negotiator in charge of the negotiations of the Greek Government with the Institutions (EC, ECB, IMF, ESM) on labour market and social security issues. She was also a member of the Management Board of the Greek Public Employme,nt Service and member of the Greek Supreme Labour Council. She has been Head of the Alternate Minister’s Cabinet, at the Ministry of Interior and Administrative Reconstruction (2015) and Accredited Parliamentary Assistant at the European Parliament (2014). She has also been Assistant to the Department of Civil Law, Civil Procedural Law and Labour Law at the Faculty of Law in Aristotle University of Thessaloniki, Greece (2009-2013) and research associate at the Greek Centre of International and European Economic Law (2009). She has given numerous lectures on employment relations and she publishes regularly in Greek and European legal reviews.