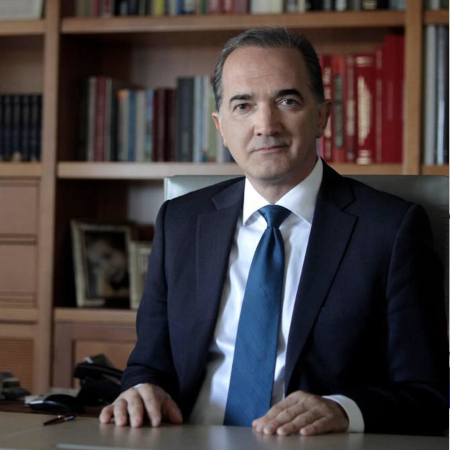 He was born in 1968 in Amfilochia and he is married with two children.

In 1985 entered the Medical Department of the Faculty of Health Sciences of Aristotle University of Thessaloniki.

He graduated in July 1991 from the School of Medicine.

He attended the clinical research and educational work of the Orthopedic Clinic of the University of Patras from March 1994 until April 1998 during the specialty of Orthopedic Surgery and Traumatology .

During his studies at the Medical Department of the Aristotle University of Thessaloniki, he served all the years (6 years) as an Assistant of the Laboratory of Human Descriptive Anatomy.

In May 1998 he obtained the specialty of orthopedic surgeon and traumatology .

In October 1997 he received his Ph.D. of the Medical Department of the Faculty of Health Sciences , University of Patras.

In April 1999, he became lecturer in Anatomy of the Medical School of Athens University.

In 2019 he was elected Assistant Professor at the Medical School of Athens.

In 2020 he was elected Associate Professor at the Medical School of Athens.

In 1995 he was awarded at National Orthopedic Conference organized by the Greek Society of Orthopedic Surgery and Traumatology in cooperation with the Swedish Society for Orthopedics.

Until now (2021) he has 58 published foreign language works in the pubmed database.

Total number of citations, as presented in the web of science and scopus v: 450 and Impact Factor: 101.521.

He specializes in knee – hip –shoulder and spine surgery.

For the last 5 years has been applying robotic technology to orthopedics.

He was also doctor in top sports teams such as the National Weightlifting team , Esperos (Α1 basket), Ethnikos Asteras (football) and he is a doctor of the Greek Karate team.