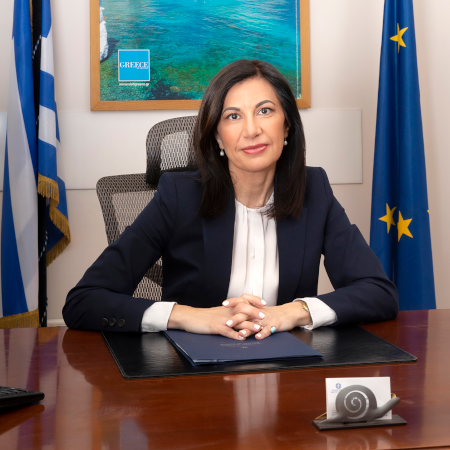 Olympia Anastasopoulou graduated with High Honors from Athens College and obtained a Law Degree from Athens University. She holds a L.L.M. in International and European Studies with a thesis on P.D.O. and G.I., as well as a M.B.A. with a major in finance and statistics.

As an attorney-at-law at the Supreme Court and Accredited Mediator with the Ministry of Justice, she has worked in Greece and abroad, whereas she has served as a legal counselor in the National Theater of Greece. Since 2010 she serves as Legal Counselor in E-EFKA.

In 2010 she was elected municipal counselor in Palaio Faliro.

In 2014 she joined the political party Potami.

In the national elections of July 2019 she ran as a parliamentary candidate in Southern Sector of Athens for New Democracy.

In January 2022 she was appointed Secretary General for Tourism Policy and Development.

She is fluent in English, French and German, married to Stefanos Adamopoulos and has two
sons.