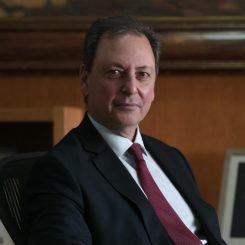 Spilios Livanos was born in Athens in 1967.

He was employed at the European Commission’s Social Fund in Bruxelles, then moved back in Greece as an executive on corporate development of private enterprises. In 2002, he founded a construction and real estate management company operating in Greece and Belgium.

In 2016 he was appointed Special Counselor for Entrepreneurship to the leader of New Democracy, PM Kyriakos Mitsotakis. In 2019 he served as Parliamentary Representative for New Democracy in the Greek Parliament.

On the 4th of January 2021 he was appointed Minister of Agriculture, Rural Development and Food.

He speaks English and French. He is married to Domna Kyrzopoulou, lawyer with whom shares three children, Dionysis, Danae and Alice.