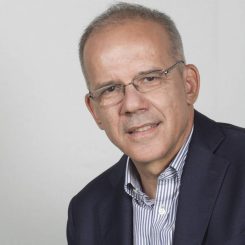 Tasos Telloglou works since 1989 for various greek tv stations as a reporter and co anchor. He has presented over 240 long form tv stories in different formats for Mega Channel, Star Channel, NEΤ, Skai TV and Antenna TV. Since February 2020 he anchors the “Special Report” on Antenna TV which he cop resents with Antonis Fourlis. Prior to this his latest long form stories were ‘Survivors “(on the Mati disaster, SKAI October 2018 )and “Greek Bankruptcy”(6 part series , Skai TV, Mai 2019). He entered journalism in 1986 for the PROTI newspaper

From 1990 to 1997 he was the Germany correspondent of Kathimerini and Mega Channel. From 1989 to 1997 and from 2007 to today he works  for Kathimerini. From 2001 to 2003 for “To Vilma” as a reporter. From 2011 to 2018 he collaborates with the investigative team of Sueddeutsche Zeitung in Munich. Tasos Telloglou studied law in Athens speaks english and german.He has written with Alexis Papahelas the book “17 “on the terrorist group “November 17th”(ESTIA 2002 ), the book City of Games (ESTIA 2004 ) and “The Network , the Siemens slush funds “(Skai 2010). 2010 and  “The adventure of Reform in the health care system” with John Kyriopoulos(Papazisis 2019). He was awarded the Botsis award in defending the public interest in the investigation on the Siemens slush funds case.