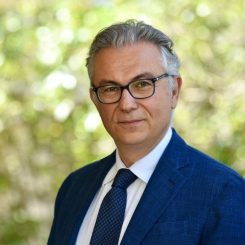 Theodoros Roussopoulos was born in Messinia, Greece on September 13th 1963. He studied at the Laboratory of Professional Journalism, before continuing with a course in Journalism at the Oxford Academy. He is a graduate of the Hellenic Open University, where he attended the Department for the Study of Greek Culture of the Faculty of Humanities. He is a PhD graduate to The University of Edinburgh since 2014. His dissertation in history is about the ethnic identity of the Greeks in Venice.

​His journalism career begins in 1981 in the daily newspaper Eleftherotypia, where he remained until 1994. During this time, he also contributed to the monthly Elle magazine. He is a founding member of Mega Channel TV station, for which he worked from 1989 to 1999 as an editor in chief and political analyst. He also produced the “7+7” documentary program. From 1987 to 1989, he contributed to Athena 98.4 FM radio station as a founding member and, in 1999, to Star Channel TV station. He has also contributed from 1994 to 1999 to Messimvrini newspaper and Kathimerini newspaper as an analyst. In 1987 he was a member of the committee of ethics at “Piraeus Channel 1”.

His political career began in 2000 with his appointment as New Democracy Spokesman and Press Representative. After the 2004 general election, he was elected MP and appointed as Minister of State and Government Spokesman by incoming Prime Minister Kostas Karamanlis. He was reelected on 2007 elections and took office as a Minister until the end of 2008 and an MP until the end of 2009. As Minister of State, he was responsible for the Secretariat General of Communication and the Secretariat General of Information, which, since its abolition in 2004, incorporated the functions of Ministry of the Press and Mass Media.

From 1997 to 1999 he taught “Television & Politics: the debates between presidential candidates of parties and prime ministers” at the University of Athens as a teaching associate. Since 2009, he is a Lecturer at the Pepperdine University of California and he teaches Journalism as an adjunct professor at the European University of Cyprus since 2015.

He is the recipient of the annual award from the “Botsis Foundation” for journalism as well as the friendship award from the Union of Turkish Journalists for the “Best European Television Program”.