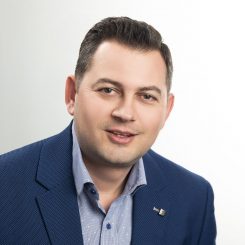 He was born in Amaliada, on September 26, 1981, where he lives. He is married with two children. He completed the Technical Vocational High School of Amaliada, majoring in Plant Production, he continued as a student and now a graduate in the Department of Organic Agriculture of the Higher Technological Educational Institution of Argostoli – Kefallinia. He holds a certificate of Lifelong Learning in Peasant Education for taking action in the secondary and tertiary sectors of the economy – Hesiod of the General Secretariat of Continuing Education. He is fluent in English and Italian. From 2004 until today, in the context of his professional and trade union activity, he participates in presentations, workshops, seminars and conferences. In particular, he participated in Conferences of Young Farmers held in Kozani (2006), Drama (2007), Athens (2008), Ancient Olympia (2009), Karditsa (2010), Lamia, Corinth and Halkidiki (2015). ), in Rhodes (2016), in Chania (2017) and in Livadia (2018).

In addition, it participates in seminars for the promotion of organic farming and the development of model crops. Professionally, from 2004 until today, is engaged in the research and organization of a standard organic farming farm with production, processing, standardization and marketing of produced organic products under the distinctive name “BIO ILIS” in products such as olive oil, citrus fruits, vegetables and edible olive, common wheat, zea wheat, currant, sun-dried tomato etc. He maintains a store of organic products in Amaliada, while he is in charge of sales of the Olympic Products Network with producers from all over Ilia. At the same time, he is active as a consultant, agronomist technologist, for the development of organic agriculture and animal husbandry and the creation of producer groups, improvement plans and Young Farmers programs. He was Chairman of the organizing committee of the 16th Panhellenic Conference of Young Farmers on “Young Farmers and Environment” September 3-6, 2009 at the IOA Ancient Olympia. He was the Chairman of the committee for the 10th Festival of Young Farmers from the “disaster in creation”, which was held in Mouria of Ancient Olympia in the summer of 2010. From 2013 until 2019 he was President of the Panhellenic Union of Young Farmers (P.EN. A).