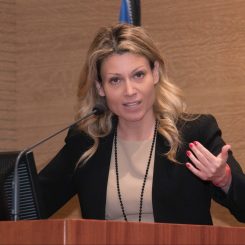 Vassiliki Lazarakou is the Chair of the HCMC and member of ESMA’s Board of Supervisors. On 16/12/2020, she was elected member of ESMA’s Management Board for the time period from 1/1/2021-30/6/2023. She has been elected, by the Boards of the three ESAs (ESMA, EBA & EIOPA), as chair of the ESAs Joint Committee Securitisation Committee.

She is a lawyer, admitted to both Athens Bar (Supreme Court Lawyer) and New York Bar, USA. She is an expert in capital markets, banking and finance law as well as in M&As and has led a large number of international and domestic business transactions.

She has a Doctorate in Law (JSD) from New York University School of Law, New York, U.S.A. and her Doctoral thesis was on “Greek privatizations in International Perspective”.

She was a Α’ Vice-Chair of the HCMC from September 2012 until the end of December 2015. During her term, she achieved the political agreement for the adoption of the Regulation and Directive on “Markets in Financial Instruments” (MiFID II/ MIFIR) as Chair of the relevant Council’s Working Group in 2014. She continued working on MIFID II / MIFIR regulatory framework, by chairing, until May 2016, the Ministry of Finance’s Committee in Greece for the transposition of MiFID II into Greek law. She also chaired the Council Working Group for the draft Regulation on European Long Term Investment Funds (ELTIFs) and managed to achieve the Council’s general approach for aforementioned Regulation in June 2014.

She was a Head partner of several law firms in Greece (including, L&L Law Firm and KLC Law before her appointment as Chair of the HCMC) while, she was working from 1996 until 2012 (before her appointment with the HCMC as Vice Chair) as a lawyer of Zepos & Yannopoulos Law Firm, one of the most prominent Greek law firms and member of Lex Mundi, being also for many years Senior Partner and Head of the Capital Markets, Banking and Finance Group of as well as co – Head of the Real Estate Group of such Firm. In 2000 and for one year she worked at the legal department of the Athens Stock Exchange.

She also has an LLM in International Legal Studies from New York University School of Law and Bachelor in Law from the Athens University, School of Law.

She is the author of several articles in newspapers relating to capital markets issues (such as, implementation of MiFID II issues, SMEs, ELTIFs, Power Market in Greece, etc.) and co-author of several legal publications (on issues such as takeover bids, listed entities’ obligations, etc.).she