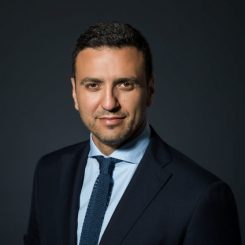 Minister of Health, Vassilis Kikilias is also a doctor, MSc in Health Care Services Management, PhD in Medicine and MP. Since October 2017 till Luly 2019 he was Head of National Defense Sector of Nea Demokratia. He has also served as Spokesman of Nea Demokratia (11/2016-10/2017). He has been appointed as Minister of Public Order & Citizen Protection (2014-15) and as Special Coordinator of Immigration Policy (2016). In the past, he was elected Head of the major opposition party in the Attica Region and as counselor in the municipality of Athens. He was a professional basketball player for many years, member of the Greek national team and as a player of AEK b.c. he won the Championship and the European Cup